Update: I jumped the gun on reporting that Cathy Riggs is the next Desert Ridge District Justice of the Peace. Here’s the latest, per Cathy Riggs…

There is no Democrat running in the Desert Ridge JP race, but Cathy must continue to campaign because there is an Independent running against her in the November General election.

I have updated the headline to reflect this new information.  The original report is below.

According to sonorannews.com, in a three-way race, Cathy won with 45 percent of the vote. The “former police officer, police academy instructor and law school graduate, left her opponents, Jeff Schapira, who came in a distant second with 29 percent and Jayne with 25 percent, in the dust.”

Since there is no Democrat running in the Desert Ridge JP race Cathy is considered elected to the post. 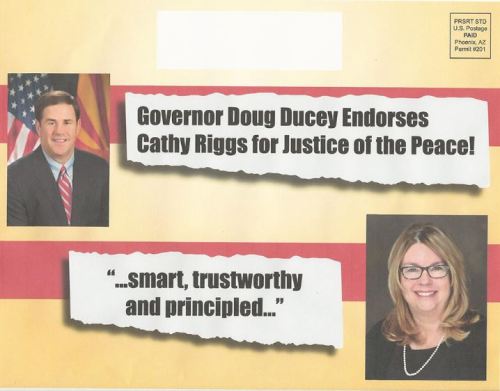